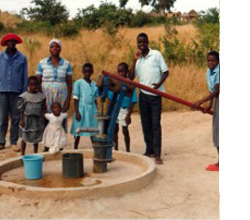 In 1988 we were sponsoring a child in Zimbabwe through World Vision. She was nine years old and her name was Shamiso Madzanika. We wrote back and forth and learned about her family and her life. In March of 1992, we received a letter from Shamiso, telling us that they had no rain and their goats and sheep were dying from the drought. We wrote back immediately asking if there was enough water for the community.

World Vision let us know that Zimbabwe was going through the most severe drought in living memory. There were many letters back and forth to World Vision and the field staff and an agonizing wait time of 2 years for all the preparatory work to be done, a borehole to be drilled and a pump to be installed. By May 1994 we had photos of Shamiso at the well.

By the fall of 1994 we heard that Shamiso, her family and the neighbours all had clean water close to their homes and that everyone was once again healthy and had enough water to do whatever they wanted. We learned that her mother had been able to start a vegetable garden and take the extra vegetables to market and started bringing in extra income. One of Shamiso’s letters reads , “Before the borehole was dug the people in the community fetched water from Mutilizwe river. The water we got from have some virus that causes some of the diseases like cholera and diarrheoa. Mutiltizwe river was also far away from our home area…After the borehole was dug, people are now drinking water from the borehole. And this borehole also reducing other water born diseases like cholera and diarrhoe

After we saw the amazing transformation of the village after they got clean water, we became extremely interested in water wells and started researching different organizations that were drilling wells in other countries. We researched different types of wells and pumps and set up our own criteria of what we were looking for.